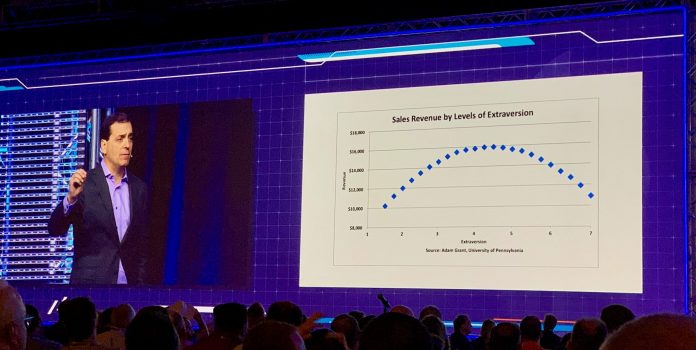 ConnectWise’s IT Nation featured best-selling author Daniel Pink, who gave a succinct keynote message, defined by animating ideas, guiding principles and specific, practical takeaways. He started with the reminder that even those in attendance who didn’t have “sales” in their title, the reality is “you’re all in sales, and you’re selling all the time.”

Sales has changed more in the last 10 years than in the previous 100 years, he added. Prior to 2010, most buying decisions were made on instinct and buyers were typically less knowledgeable than sellers. Since then, buyers have become empowered with information, and they’re less likely to pay too much for a product or service.

Attunement — Having empathy toward the buyer. One of the best ways to get in tune with a potential buyer is by mirroring their body language (without being too overt) and mirroring their language. Conversely, one of the biggest mistakes TSPs make is using technical terminology when talking to buyers who aren’t familiar with tech speak. When you do that, it often creates communication barriers and hinders the sale process.

Buoyancy — Staying afloat in an ocean of rejection. To avoid becoming defeated by all the “No’s” you have to deal with in sales, remember the three P’s:

Talking back to yourself after facing sales rejection to make sure you’re not succumbing to the “Three P” pitfalls above will make you a more buoyant salesperson, says Pink.

Clarity — Move beyond problem-solving to problem finding. Being a problem solver is good, but it’s becoming a commoditized skill, warns pink. Strive instead to help customers and prospects uncover latent problems or hidden problems that they don’t even know they have.

The final points Pink made during his talk were on topics I hadn’t heard before and unless you’ve read his recent books, I’m betting you may not have either:

One final call-to-action Pink made was that instead of putting so much emphasis on changing people’s minds about a product or service, spend more time getting people to act. The key, he says, is to make it easier for customers and prospects to do stuff and to work with you. For more great tips from Daniel Pink, follow him on Twitter (@DanielPink) and check out his website: danpink.com

Need to Set a Course for Business Success? Follow the Money

New Opportunities for MSPs and VARs to Sell Payment Processing